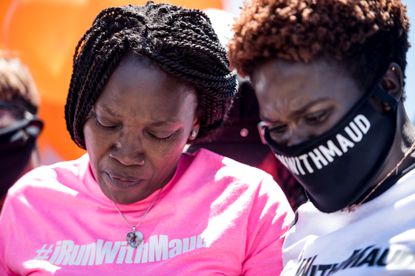 There’s a nationwide outcry for justice to be served for Ahmaud Arbery, who is yet another unarmed Black man who was gunned down simply for being Black.

His mother, Wanda Cooper-Jones, did an interview with TMZ on Tuesday and she made it clear that she wants her son’s murderers and accomplices to be jailed for life.

“I would like for all hands that were involved, that played a part in my son’s murder, to be prosecuted to the highest,” she said. “Coming from my point of view, my son died, so they should die, as well.”

Cooper-Jones added that she “would totally agree with” the death penalty.

The grieving mother told the tabloid she wanted the father and son who have been charged with Ahmaud Arbery’s murder, Gregory and Travis McMichael, and the cameraman, William “Roddie” Bryan, to serve life sentences.< Arbery was gunned down in Georgia on February 23rd while jogging in a suburban neighborhood. After a video of the deadly incident surfaced online, Georgia authorities began to actually care about the case.