20 years after the tragic death of R&B Princess Aaliyah, secrets are still being revealed about her secret marriage to R.Kelly.

The singers adamantly denied the marriage ever happened, even after the marriage license was published by Vibe Magazine. During Kelly’s federal racketeering and sex trafficking trial in Brooklyn, the minister who officiated the marriage on Aug. 31, 1994, spoke out for the very first time.

Nathan Edmond, now 73, told the court he had never met either Kelly or Haughton prior to the ceremony and had not known who they were. “I didn’t think it was anybody special — I didn’t understand it at all,” Edmond said in his testimony, which took place over a video conference call. Edmond spoke after being subpoenaed, and he stated that he did “not especially” want to be taking the stand.

According to the federal indictment against Kelly, he met Haughton when she was 12 years old and began a sexual relationship with her when she was still a young teen. The prosecution stated that allegedly that the “Ignition” singer married  Aaliyah because he believed she was pregnant, and that it could keep her from testifying against him. Kelly was no stranger to breaking the law when it came to Aaliyah having previously been charged with bribing an official in Illinois to get a fake ID for Haughton, and the marriage license falsely listed her age as 18, which would later be the key reasoning behind the annulment that would take place shortly after the marriage was discovered. 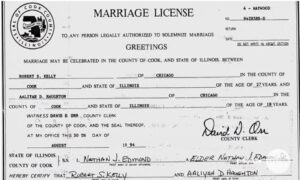 Edmond was then called in to handle the ceremony. It was a quick ceremony, “about 10 minutes or less,” in a hotel in the Chicago suburbs, Edmond said. The only attendees were himself, Kelly, Haughton, Williams, and “about three other gentlemen” whom Edmond did not know. Prior to conducting the ceremony,  Edmond said he was asked to sign a confidentiality agreement, but he did not, saying it didn’t look legally sound. “I looked at it, I read it, then I kind of chuckled… and said it wasn’t worth the paper it was written on.” Instead, he was asked to give “his word” that he would never speak about the ceremony, to which he agreed. He was offered somewhere between $25 and $50 to officiate, but he declined the money, he said. For the wedding ceremony, Edmond recalled that Kelly and Haughton wore matching jogging suits, each with one pants leg rolled up to the knee. “You couldn’t see her whole face, because her hair was over her face,” Edmond said of the teenage singer. Edmond has been contacted by the media over the years, he said, but until Wednesday, he had never shared his recollection of the marriage.