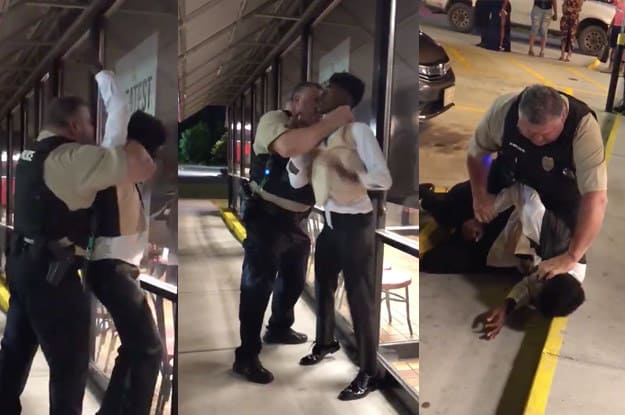 The Warsaw Police Department is under investigation after one of its officers was seen in a video choking and slamming Anthony Wall, 22, outside of a Waffle House.

The police were called after Wall got into an argument with the staff. There’s a video that shows a heated Wall going back-and-forth with the crew members. He’s taking full accountability for his actions, but says the officer’s actions were unjustified.

“I was pretty much trying to scream for air and trying to breathe because he was holding my throat and that’s when I got aggressive with him because you are choking me,” Wall told ABC11.

A spokesperson for the Waffle House said, “We are looking into the incident that occurred at our Warsaw, NC, restaurant to gather all the facts. Initial reports say the customer became agitated, and the police were called.”

Warsaw Police Chief Eric Southerland told the News & Observer that the incident is being investigated.

“We are aware of the video and currently working on an investigation, following up based on the video posted, doing interviews, gathering video evidence. It’s not what you’re trained to do in incidents like this, but when you’re dealing with someone fighting and resisting against an officer, you try to use proper tactics and go for one move, but that might not work because that person is moving or the officer is moving.”

Childish Gambino Breaks his Foot During ‘This Is America’ Tour

“This Is America” MashUps: Is the Internet Taking it Too Far?