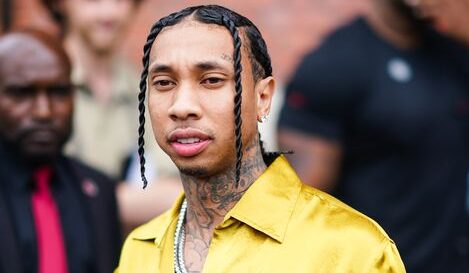 Tyga turned himself to Los Angeles Police Department after his girlfriend, Camaryn Swanson accused him of domestic violence.

Tyga began dating the 22-year-old model at the top of the year and according to TMZ, the incident took place after Swanson showed up at Tyga’s home around 3 a.m. on Monday and was acting belligerent at the door screaming at the tops of her lungs after Tyga told her not to go.

Swanson later shared screenshots of her and Tyga’s text messages before she left for his house. The messages showed that he sent a car to pick her up and bring her to his home. She addressed the “Taste” rapper’s claims that she showed up unannounced. “I didn’t show up ‘screaming’ or uninvited,” she told TMZ. “When I tried to leave he physically assaulted me and refused to let me leave for hours.”

Roommates, it looks like Tyga is under fire for allegedly assaulting his ex-girlfriend model Camaryn Swanson. According to @TMZ the former couple got into it after Camaryn allegedly showed up at his home screaming around 3 am. https://t.co/iXqYThGWzS pic.twitter.com/hpV8cmYKzy

Swanson claims Tyga hit her and shared images of the injuries that occurred during the altercation. In one video, the model’s eye is bruised and blackened. In another, she raises her sweatshirt close to the camera where blood stains can be seen across her sleeve where she wrote, “I’m so embarrassed and ashamed it had to get to this but I have to stand up for myself ” she wrote in one message.

According to ABC 7, Tyga was arrested in connection with a domestic violence incident after he turned himself in earlier today in Hollywood. 👀pic.twitter.com/4X4pCmzqvi

Tyga Sued by Landlord for Unpaid Rent and Damages

Then in another post, she wrote, “Honestly I’m so heartbroken and didn’t think you were capable to ever do this to me.,” she wrote on Instagram while sharing their alleged text conversation.

According to the Los Angeles Sheriff’s Department, his bail was set to $50,000 after he was arrested at 9:30 am Tuesday morning.

Tyga has been pretty tightlipped about the recent domestic violence claims and it’ll probably stay that way.

Tyga Sued by Landlord for Unpaid Rent and Damages