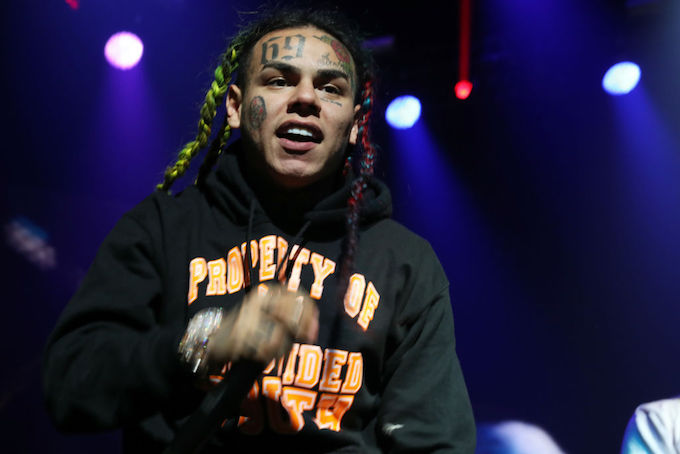 Five members of Tekashi 6ix9ine‘s security team was indicted for a robbery in New York City.

The five men were charged with robbery in the first and second degree, and criminal impersonation in the first degree.

Manhattan prosecutors claim the incident occurred after a 34-year-old man tried to video record the disgraced rapper on his cellphone then chased him for 20 blocks.

They followed him in three SUVs equipped with the same lights and sirens authorities will use. The man tried to make contact with an officer and that’s when retired detective, Daniel Laperuta, who is apart of 6ix9ine’s team, used an invalid NYPD Member of Service card as a credential and told the officers the man pulled a gun on them before continuing the chase.

When they were able to forcefully stop him, security team member Sammy Sprouse allegedly “approached the victim, opened his car door, unbuckled his seatbelt and pulled the victim’s arm, per Vulture. Bodyguard Christian Cortez “pointed a Taser at the victim,” and Laperuta approached him “with his hand on his holstered gun.” They stomped on his phone before fleeing the scene.

“A celebrity entourage is not a police department, and Manhattan is not the Wild West,” said District Attorney Vance, per a statement from the Manhattan District Attorney’s Office. “As alleged, these highly-compensated vigilantes caravanned through the streets of Harlem with sirens flashing in order to track a man down and steal and break his phone. Along the way, a retired NYPD Detective tried to cover up their conduct by lying to his former colleagues and repeatedly claiming the victim had threatened to shoot them. False reports–especially about firearms–can carry devastating consequences and fortunately, no one was injured or killed in the actual police response.”

Do you think Tekashi 6ix9ine’s security team had the right to impersonate authorities and damage a civilian’s property because they’re protecting a celebrity?

Funk Flex on 6ix9ine’s New Song: “I’m Not Going to Play This… BUT This is Thumping’