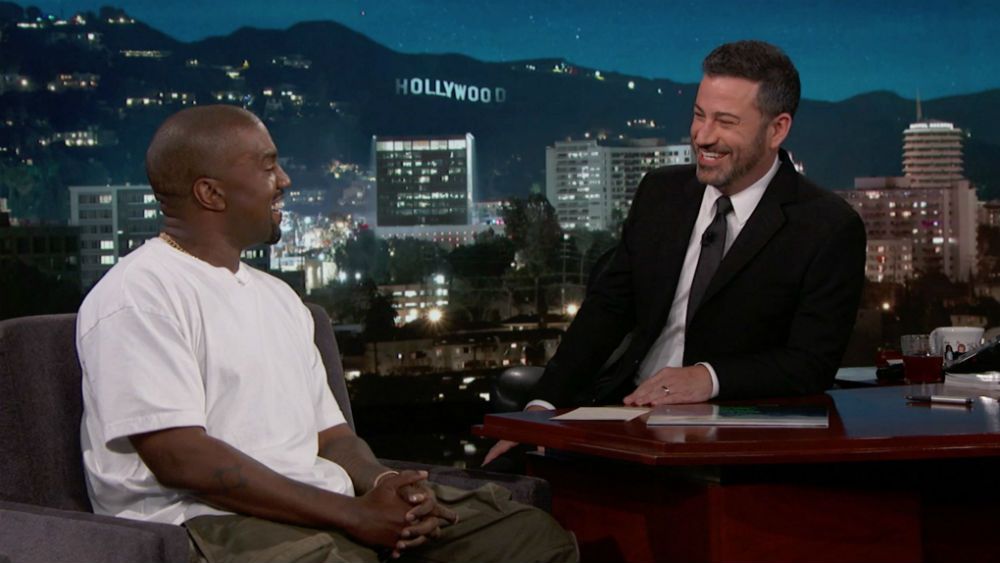 
Kanye West and Jimmy Kimmel reunited Thursday night for the first time in five years after their beef when Ye accused the talk show host of mocking him.

Of course we all wanted a better explanation for Kanye’s admiration for controversial President Donald Trump, considering that he never gave us one. The late night show host transitioned his way into the topic of Trump by initially bringing up Kim Kardashian’s meeting with POTUS to secure Alice Marie Johnson’s clemency.

“Just as a musician, African American, everyone around me tried to pick my candidate for me and then told me that I couldn’t say that I like Trump,” Kanye remarked. Kimmel later brought up Trump’s immigration policy and particularly the separation of children from their parents. “There are families being torn apart at the border of this country. There are literally families being torn apart as a result of what this president is doing […] We cannot forget that. Whether we like his personality or not, his actions are really what matter,” he said. Things got quiet and Kimmel cut to commercial break. Speaking on his 2016 hospitalization, Kanye said that the experience made him lose “his confidence.”

Yeezy continued to build on the topic of his confidence saying that he was afraid to endorse Trump, but after building confidence following his 2016 hospitalization, he vowed to never allow anyone to “bully” him again. Therefore, Trump is still his “brother.”

“I didn’t have the confidence to take on the world and possible backlash. It took me a year and a half to have the confidence to stand up and put on the hat, no matter what the consequences were and what it represented to me – it’s not about policies ’cause I’m not a politician like that but it represented overcoming fear and doing what you felt no matter what anyone said and saying you can’t bully me, liberals can’t bully me, news can’t bully me, the hip-hop community, they can’t bully me,” he explained. “Because at that point, if I’m afraid to be me, I’m no longer ‘Ye. That’s what makes Ye. And I actually quite enjoy when people actually are mad at me about certain things.”

The conversation then returned back to Trump and Ye annoyingly suggested that we should try to fight the POTUS with love instead.

Kimmel said he understood where his guest was coming from, but denied that the matter was so simple. “There are literally families being torn apart as a result of what this president is doing, and I think that we cannot forget that whether we like his personality or not, his actions are really what matter,” he said. “You’ve so famously and so powerfully said ‘George Bush doesn’t care about black people,’ it makes me wonder what makes you think that Donald Trump does, or any people at all?”

Lil Nas X Gets His Own Day In Atlanta, After “Industry Baby” Debuts At No .1 On Billboard